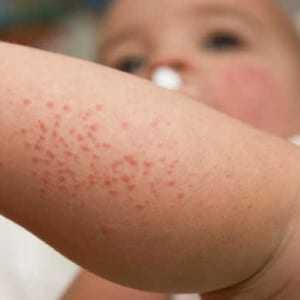 Hives is one of the most frequent causes for doctors’ visits. The acute presentation is extremely common and possibly affects 10-20% of the population at some point in life. Hives are characterized by the appearance of raised skin injuries with an erythematosus aspect and the presence of itching is characteristic.

The aetiology is varied and its ethopathogenic mechanism is usually multiple. It appears as brief isolated episodes and its location depends on type of manifestation but can affect the whole skin surface.

It can appear as single manifestation of an allergic reaction or can be part of a general reaction such as anaphylactic shock and respiratory manifestations, or even as a manifestation more within a complex systemic process.

From the immune-pathological point of view, skin rash is the consequence of pre-formed mediators being released by cells (mast cells and basophils) with histamine being the most important and the one responsible for dermal expression. Other factors are also liberated starting with mast cells, for example the Platelet Activating Factor (PAF); its direct action on platelets makes them release serotonin that can be responsible for chronic hives. Another mediator freed by mast cells may be the chemo-tactical factor of eosinophils that could be responsible for those cells migrating to the inflammatory focus.

Most frequent causes of hives amongst the general population are first of all medications, and with lower incidence foods, insect bites and certain antigens (inhaled, ingested or by contact).

In pediatrics, foods are the main causes for this pathology followed by medication and other allergens. That primacy of foods is inverted along time in favor of medicines. When acute hives are present in relation to certain seasons, we must consider that etiology is in accordance to the allergen prevailing at that moment, and its trigger mechanism can be through inhaling, ingestion or even through contact. Some individuals allergic to latex present hypersensitivity reactions after eating plantains, avocados or kiwis. Several theories try to explain the existence of that double latex-fruit sensitivity.

Physical stimuli are a frequent cause of skin rash; usually a minimal trauma is able to cause hives (dermographism); in other individuals, it is caused by cold, pressure or exercise stimuli. Other
aetiologies can be implied in its genesis, such as parasites, thyroid diseases and rheumatoid diseases. 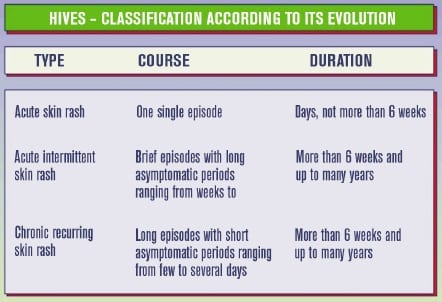 The characteristic symptom of hives is a wheal that can appear anywhere in the body. It can occur in different forms that more or less vary in size, tending to converge and accompanied by itching. One of hives’ characteristics is its relapsing character. The so-called oral allergy syndrome is characterized by affectation of the oral mucosa and lip oedema until posterior appearance of hives without discarding the possibility of bronchial, nasal, conjunctival or gastrointestinal symptom appearance and even exceptionally, anaphylactic shock.
When hives are present for a prolonged period of time we say it is chronic hives; that period has been established in a random manner at 6 weeks. Among chronic hives, physical ones are the ones that occupy first place.

When there is a direct cause-effect relation it can be very simple, as skin tests confirm sensitivity. Auto-immunity and rheumatoid factor tests can be done, as well as VDRL, cryoglobulins and parasite tests in feces. Other specific tests are provocation through foods, inhalers, medications, ice cubes, exposure to light, vibrating agitator and aquagenic exposure.

Skin tests with medications usually have sensitivity, as we are working with incomplete antigens; with foods, sensitivity is greater and although the usual batteries offer a great number of false negatives, the use of foods in a natural state notably broadens diagnostic possibilities. 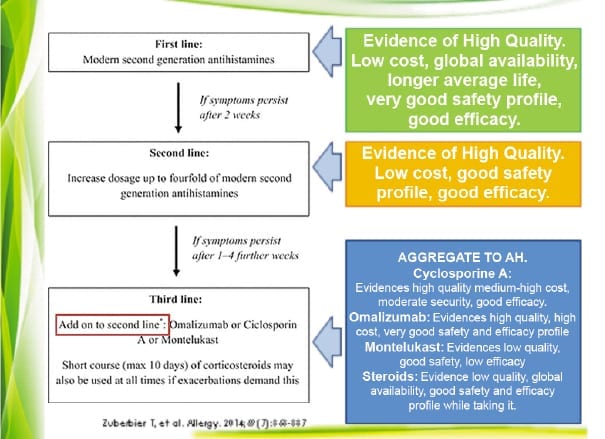