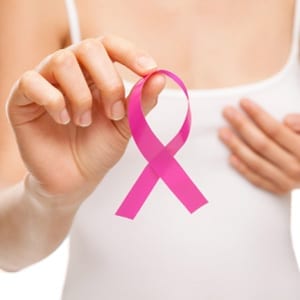 Being diagnosed with breast cancer is a life-changing situation; there are many emotional aspects to manage and information must be sought to learn about it.

Recently diagnosed men and women, their families and friends, need information that will provide different breast cancer treatments and prognosis options. The pathologies can be the source of information. Unfortunately, pathology reports are written in words than only pathologists or specialized doctors understand. The pathology report is a collection of information that describes the breast cancer condition and type. Not everything contained in this article can be applied to an individual person. When reading other articles you will notice some of them provide similar information, therefore not all tests are necessary. Most reports contain positive information and others contain negative information. What is important is the complete report. Specific questions about your pathology report must be asked to your oncologist or pathologist.

As pathology reports use different interpretation formats, we have tried to write the terms that can be used in the report in a general manner.

Size:
The smaller the tumor the better the prognosis. The larger the tumor, chances that it has spread to other parts of the body increase. The tumor size is reported in centimeters (2.54 cm = 1 inch).

Invasive vs. Non-Invasive:
The breast is formed by lobules and ducts; lobules produce milk and ducts carry the milk to the nipple. The most common form of cancer is invasive intra-duct, cancer that originates in the duct and spreads out of it. NON-INVASIVE cancers are classified as in-situ because they remain inside the duct or the lobule. Invasive cancer is when it has invaded the wall of the duct or lobule.

Histopathological Grade:
It is measured using the Bloom-Richardson of Scarff Bloom-Richardson scales. It is based on a combined score for nuclear grade, mitosis grade, histological grade and architecture differentiation. Each characteristic must render a score of 1 to 3, resulting in a total that ranges from 3 to 9.

Nuclear Grade:
A scale of 1 to 3 is used. Grade 1 (low) means a small nucleus with minimum size and form variation. Grade III (high) indicates large nuclei with marked variations in size and form. Grade II (intermediate) is when the nucleus shows changes between grade I and III. The higher the grade, the more aggressive the tumor is.

Mitosis Grade:
It indicates the number of malign cells that are dividing actively. The mitosis grade is reported as 1 to 3. The higher the score, the more aggressive the tumor is.

Cell Differentiation:
This measure relates similarity between the normal breast tissue and the tumor removed and refers to tubular formation of cells. Grade 1 indicates good differentiation of many ducts. Grade II, moderate differentiation and Grade III indicates poorly differentiated tissue with little number of or no ducts.

SURGICAL MARGINS:
When a tumor is removed, the borders must be marked with ink. Then the pathologist, through the microscopic study, will indicate if the tumor “is free of malign cells or the borderline is invaded”. Invaded margins or borders generally indicate a second surgery is needed until the remaining tumor is resected, and to “free the margins”.

LYMPH NODE CONDITION:
Our body has a network of vessels and lymph nodes that remove liquid (lymph), similar to the way blood vessels work. Lymphatic tissue has white blood cells that protect from infections. With an invasive cancer, tumor cells spread through lymphatic vessels. Therefore, during invasive cancer surgery, the surgeon generally resects the lymph nodes in the underarm. And if cancerous cells are found in the lymph nodes, it is reported as positive. The report will indicate the number of resected nodes and how many are positive (e.g. 0/11 is there are no lymph nodes; positive 3/15 if three lymph nodes are positive out of 15 resected). Negative lymph nodes is a condition for better prognosis than if lymph nodes have been invaded by the tumor.
Lymphatic vessels can be visualized injecting radioactive material into the tumor and around it. The initial or first lymph nodes that show radioactivity are called sentinel lymph nodes. In average, two lymph nodes are identified, resected and analyzed, even though there is no radioactivity. That procedure is called “sentinel lymph node mapping”. The finding of a positive sentinel lymph node is generally followed by a surgical resection of more lymph nodes.

HORMONAL RECEPTORS’ CONDITION:
Hormonal receptors indicate how sensitive cancerous cells of the breast are to estrogens or progesterone. Cancerous cells sensitive to “ER” estrogens or “PR” progesterone have a larger number of receptors than cells not sensitive to those hormones. That sensitivity can produce cancerous cell growth. If your cancerous cells have a high number of ER or PR receptors, the report will say that you are ER positive or PR positive. If your cells have a low number of ER or PR receptors, the report will state that you are ER negative or PR negative. THAT INFORMATION IS EXTREMELY IMPORTANT IN YOUR PATHOLOGY REPORT. If you are ER or PR positive, it means you will benefit from the hormonal treatment. If ER or PR negative, treatment is different, as your oncology doctor will explain.

HER2 CONDITION:
The HER2 gene (HER2/NEU, c-erb-2 or erb-2) produces a protein that is a basic component for cell growth that acts as receptor in the cell’s surface. That receptor is sensitive to another protein that tells the cell when to grown. If cancerous cells have ore receptors than normal, they receive an order to grow and multiply. There are two ways to measure the HER2 condition: one is the test called immune histochemistry (IHC). The IHC measured the number of receptors of the cancerous cell’s surface and is reported between 0 and +3.

Results of 0 and +1 are HER2 negative. Results +2 and +3 are HER2 positive. Only 25% of women with breast cancer are HER2 positive. HER2 positive means that the tumor is growing faster and is more aggressive, and HER2 negative means the opposite. The other method to determine HER2 is called fluorescent in situ hybridizing (Fish). Fish measures the number of HER2 gene copies in cancerous cells. The result of this test is reported as positive or negative. For additional information about the HER2 gene please ask your oncology doctor.

KI-67 PROLIFERATION INDEX:
KI-67 protein, part of living cells, is found in all stages of the cell cycle; the test for KI-67 reveals a percentage called S-FASE or proliferation fraction. Less than 10% means a favorable prognosis; more than 20% an unfavorable prognosis and between 10 and 20% is considered limit. The test to measure KI-67 is related to the grade of all tumors. Grades vary between 1 and 3, with number 3 being the most aggressive one. Negative ER and PR tumor receptors tend to have a high KI-67 in proliferation factor. That score can be used to determine the best treatment for a patient including chemotherapy, additional to surgery for both patients with negative or positive receptors. KI-67 is not properly correlated to the clinical stage of the tumor as does the size, lymph nodes or distant metastatis.

STAGING:
Clinical staging is the estimate about how much the breast cancer has advanced and it determines treatment and prognosis decisions. Knowing the clinical staging of the patient, the doctor will decide what the best treatment is. Generally speaking, if the staging is lover, the prognosis is better. The TNM SYSTEM is used for staging.

T is for tumor size
N is for Lymph Node condition (presence of cancer cells in lymph nodes is called positive condition)
M means metastasis (the tumor has spread to other parts of the body).

The following table summarizes those three factors for better understanding: 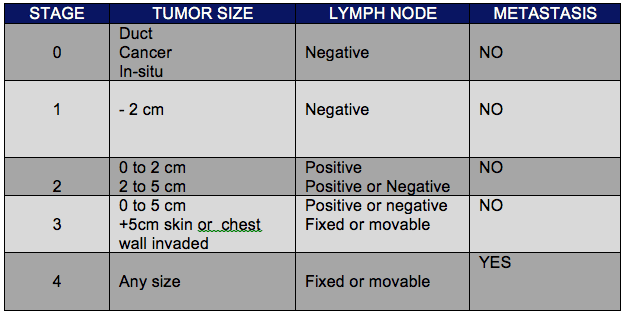 This information is free and can be obtained at BREAST CANCER NETWORK OF STRENGTH, 135 F. LaSalle Street, Suite 2000,
Chicago, IL 606013 or through www.networkofstrength.org
Courtesy of Bristol-Myers Squibb 2010